What Is Commercial Wallpaper?

Regular wallpaper, like the kind you’d put in your bathroom or kitchen, is only suited for a limited amount of wear and tear. It can’t handle hundreds of people, furniture, equipment, and suitcases bumping into it. If you were to put a regular non-woven print in a building hallway, for instance, it would be torn and scratched beyond recognition in a matter of days.

Commercial wallpaper is split up into two categories: Type I and Type II. Both are made for commercial spaces but Type II is more durable and scratch resistant. If you really tried, you could tear a piece of Type I wallpaper with your hands but you couldn’t do that with a Type II.

How Is Commercial Wallpaper Sold?

Commercial vinyl goods are ONLY sold by the yard and are 52"-54" wide. They are not sold in little double rolls like residential wallpaper.

You order commercial wallpaper like you would order fabric, except it must be in 30-yard increments. Each 30-yards is known as “a bolt” and rolled around a center piece of cardboard. 90 yards, for example, would be the equivalent to 3 bolts.

How to Measure Commercial Wallpaper?

54 inches x 1 yard = 13.50, so technically, one yard of commercial wallpaper should net you 13.50 sq. feet. However, we would never recommend making your calculations based on that number. That is cutting it way too close and doesn’t account for installer mistakes, double cutting, or any waste. Things happen and the last thing you want is to get to the end of a hallway and run out. It’s not a fun experience, for your installer or yourself, to run out of wallpaper right before the project is finished! It could add 1-2 weeks on a job and that’s assuming the same wallpaper, in the same run, will be in stock.

We divide by 12 to avoid this problem. That accounts for waste and we have found great results by using that number. It is better to have a little more than you need than not enough! Dividing your total square footage by 12, and then rounding up to the nearest number divisible by 30, is the best way to calculate the total number of yards you’ll require.

How Much Does Commercial Wallpaper Cost?

The range is typically $9.99 per yard to $39.99 per yard. Type I is cheaper than Type II wallpaper (usually). Designer commercial grade wallpaper will the most expensive.  The price is also determined by the factory it’s produced and license agreements. Candice Olson commercial grade wallpaper will be some of the most expensive, for example, because the manufacturers have to pay Candice Olson royalties and fees for the use of her name.

Commercial wallpaper and commercial wallcovering are the same thing. Some people say the former and others the later. When you go from residential commercial, however, most people start saying wallcovering. But you can use each one interchangeably.

Can You Buy Commercial Wallpaper by The Roll?

In most cases, no. Commercial wallpaper is sold in 30-yard bolts. That is starting to change, as of 2019. The Warner Wallcovering line has always had a line of commercial grade wallpaper sold by the double roll. For the longest time, they were the only one. This year, we’ve been introduced to other lines coming out with their own collections of commercial grade vinyl sold in traditional double roll quantities (as well as 54" wide). This is more an exception to the rule and typically you need to plan to order commercial wallpaper by the yard, in 30-yard increments.

How to Find A Commercial Wallpaper Installer?

Okay, listen up – most wallpaper hangers, aka paperhangers, do not like to mess with commercial wallpaper. It’s heavy, cumbersome to maneuver and frankly, doesn’t pay as well as a tiny bathroom. The total amount is bigger but it takes them longer, thereby, really lowering their total dollars per hour. In fact, you’ll find that most experienced paperhangers loath hanging commercial vinyl goods on their forum or private Installers Facebook group. They complain day and night about the stuff.

Instead, you’re want to look for commercial painting contractors. When it comes to larger wallcovering jobs, commercial painters are usually the ones who do this type of work. Most of them charge by the sq. yard and the prices vary greatly depending on which area you live in. If you live in an area with a lot of competition then you’re in luck – you can get multiple bids. But in many places, there is only 1 commercial painter who does wallpaper and you’ll therefore have to take whatever price he gives you.

Yes, all commercial wallpaper sold in the United States is Class A Fire Rated. It has to be or the building will never pass inspection by the Fire Marshal.

All commercial grade vinyl is tested in accordance with ASTM E-84 Tunnel Test and must meet or exceed a specific flame spread and smoke developed number. This is typically 25 and 45 respectively.

True story: we had a new club, under construction, that called us on Friday afternoon, in a panic. Apparently, they had ordered some expensive wallpaper from the UK and didn't know that Europe has different fire standards.

They failed inspection. The club had scheduled their grand opening for the following week and they called us, desperate, to overnight them similar looking wallpaper that was Class A Fire Rated.

We somehow happened to have 40 rolls of a similar black and white damask print (miracles do happen) and overnighted them the wallpaper, with flame resistant documentation for the Fire Marshall. He passed them and they were able to open on time, by the hair of their chinny chin chin.

Will Mold Grow Under Commercial Wallpaper?

Most commercial vinyl wallcovering is also usually made with bactericides and mildew inhibitors to discourage the growth of mold and mildew under normal conditions. 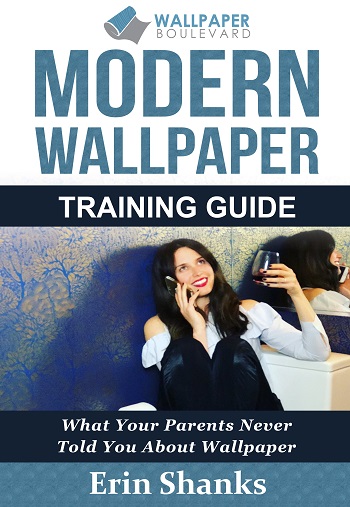